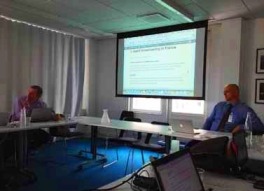 To address these issues, The ITU set up a special joint task force (jTG 4-5-6-7) to review how to find more spectrum for mobile broadband and to assess the possibility of shared usage of 700 Mhz band. The Russian contribution to the jTG 4-5-6-7 highlighted concerns that this would limit the competition and lead the way to technological monopolisation.

The first meeting of the group took place in Geneva in july 2012 and the discussion was on the structure and agenda of the subgroups. The work of another ITU permanent group, the WP5D, which specialises on mobile broadband technologies will influence the discussions of the joint task force. The WP5D is currently looking at suitable bands and discussions centre on bands 470-694 Mhz and 1452-1492 Mhz.

CEPT, the European organisation of national regulatory bodies, established the Conference Preparatory Group. A subgroup, the Project Team will handle the preparation of the European position on mobile broadband issues for WRC.

It is important that the whole broadcasting community contribute to the preparations of the next WRC to ensure that the spectrum needs of broadcasting will be secured. The WorldDMB Regulatory and Spectrum  Committee will keep WorldDMB members updated on the outcome of these meetings which will be occurring in the last quarter of 2012. If WorldDMB members have questions on issues of spectrum and frequency allocation please contact the Project Office.

This entry was posted on October 25, 2012 by WorldDAB in Asia Pacific, Digital Radio Rollout, Spectrum and Regulation.