Since the announcement by NPO (Netherlands Public Broadcasting) that DAB+ was the successor of FM in the Netherlands in November 2011, significant steps have been made towards the digitalisation of the Dutch radio industry.

A Memorandum of Understanding on the cooperation to deploy a distribution network for DAB+ was signed by NPO and VCR (Association of Commercial Radio) in June 2012. They have agreed to simultaneously roll out their DAB+ transmitter networks starting 1 September 2013. As a result, in those areas where DAB+ coverage will be available, listeners will have access to a large and diverse range of public and commercial radio stations.

NPO and VCR also intend to jointly communicate with the Dutch government and the industry for consumer electronics with the aim of turning DAB+ into a success in the Dutch market. 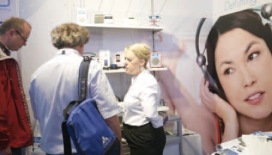 WorldDMB hosted a booth which featured a wide range of products to interact with.

As part of informing the Dutch broadcasting industry about the benefits of going digital, WorldDMB together with the Dutch Ministry of Economic Affairs held a workshop for broadcasters during IBC.

The conference session, ‘The Digital Radio Experience: Case studies on Going Digital’ was attended by over 140 commercial broadcasters and international digital radio experts. Issues discussed included cost, regulation, competition, and revenue generation by looking at lessons learned from Germany, UK and around the globe.

This entry was posted on October 25, 2012 by WorldDAB in Content and Services, Digital Radio Rollout, Europe, Events, Marketing, Receivers.