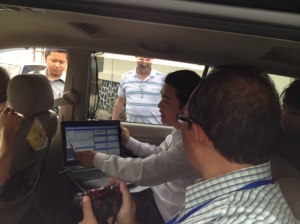 Interest in digital radio in the Asia Pacific region is at an all time high following transmission workshops in both Indonesia and Thailand.   Utilising DAB+ equipment and expertise from Australia and Europe, Commercial Radio Australia and WorldDMB conducted DAB+ transmission demonstrations in Jakarta and Bangkok.

Broadcasters were able to see firsthand the DAB+ signal in operation in their own city.  A full scale trial is being planned by Thailand to commence later in 2013.  Following the workshop in Bangkok, the DAB+ receiver display at the ABU Digital Radio Symposium attracted interest from Bangladesh, United Arab Emirates, Afghanistan, Iran and other areas of the Middle East and from Malaysia, Indonesia, Sri Lanka and other areas of the Asia Pacific.

CRA and WorldDMB will continue to highlight DAB+ in the important motoring and receiver manufacturing Asian region, planning a full day workshop on DAB+ at Broadcast Asia in Singapore in June and jointly sponsor the ABU Radio Asia forum in Hanoi in July.  CRA and WorldDMB have approached national radio broadcaster, Voice of Vietnam to host a workshop and technology demonstration prior to Radio Asia.

The DAB+ trail in Malaysia by public broadcaster RTM continues and the next step is to involve private broadcasters in the trial.

The DAB+ trials in Canberra and Darwin continue to provide valuable information for broadcasters in Australia and the region.  On channel repeater trials are being planned for Canberra in May which will use the ABC test vehicle to determine the impact of terrain and distance and inform the costing and operational aspects for regional deployment of DAB+ using high powered main sites and repeaters.  A plan to test DAB+ equipment’s interoperability and interface with centralised data services for emergency information is in development.

Digital radio and the automotive industry

Further inroads have been made with Australian vehicle manufacturers with 10 major international brands now including DAB+ digital radio as either standard or as an option.  Jaguar, Isuzu Trucks and Ford recently announced the inclusion of DAB+, joining Toyota, Hino, Lexus, BMW, Audi, Mercedes and Land Rover.

In the first year of DAB+ being included in these vehicles as standard or options, over CRA has been advised by the vehicle manufacturers have sold more than 14,000 units.

Working with the Telcos

CRA is meeting with Australian Telcos to demonstrate mobile devices, including the Samsung WiFi 5 media player from iDAG which shows DAB+ audio, text and images off air.  There is interest from at least one local Telco in supporting the adoption of DAB+ in future smartphones.  CRA is also working with WorldDMB’s Hybrid Taskforce to ensure interactivity can be offered by broadcasters via embedded links in broadcast content.  Audiences can engage with content and advertisers on connected devices.  CRA is also working with broadcasters around the world to ensure a common approach to the inclusion of digital radio in Smart phones.