Germany: The point of no return

The digital radio market since its launch in Germany in August 2011 has seen some key indicators that demonstrate that Germany is at a point of no return in its campaign for digital radio rollout.

During a dedicated digital radio session at Radiodays Europe, Berlin (17- 19 March) Michael Reichert from the ARD Digital Radio Project Office highlighted just a few of these key indicators to demonstrate that Germany may have reached the point of no return in its quest to rollout digital radio. He also provided an overview of the continuing work of the Project Office in its campaign to ensure full coverage of DAB+ in Germany and raise consumer awareness.

The messages that are being reinforced by the German radio industry are that digital radio is: 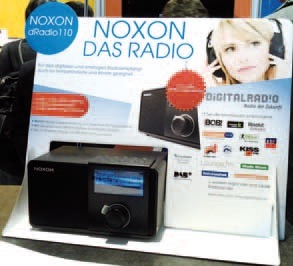 There are currently 13 national stations and over 60 of the well-known regional ARD radio stations available digitally. Furthermore, 27 commercial regional stations and also a lively local radio scene in Bavaria which is complementing the broad variety of content. The total coverage is currently at 90.1% which has been achieved since the launch of DAB+ in Germany in August 2011. ARD and MediaBroadcast are continuing their work of extending their transmitter networks with Würzburg, Chemnitz and Thüringen being the latest to be covered. In total more than 20 new transmitters will be added during 2013.

Work is also underway by the ARD to provide categorised slideshow by mid 2013. View examples of how interactive slideshow is currently being used in Germany by clicking here.

The momentum of digital radio rollout in Germany is further reinforced by receiver sales:

Further news from the German market indicating that digital radio beyond the point of no return is that the leading automotive brands such as VW, BMW, DAIMLER and OPEL are now line fitting DAB+ or offering it as optional to German consumers. 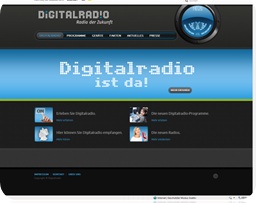 The focus for the German market is now on marketing initiatives with the newly formed Digital Radio Initiative overseeing the facilitation of consumer and retail marketing with a consistent brand and message on digital radio. The new Project Office carries out practical work for the joint initiative between the ARD, Dradio, Media Broadcast and commercial broadcasters.

The ARD Project Office for Digital Radio similar, to other country rollout bodies such as DRUK and Digitalradio Norge, undertakes key initiatives to help smooth the transition to digital radio.

Raising consumer awareness is an important role of the Project Office as is working with retailers. Retailers need to understand the benefits of digital radio so that they can in turn sell radios to the consumer ensuring that the consumer makes an informed choice when making purchases. Therefore the Project Office also undertakes holding b2b events and point of sale promotional activities and building relationships with the retailers.

A marketing campaign will run in Berlin during June/July 2013 with public and commercial stations taking part and it will cover 21 video and digital walls across the city.

A marketing campaign from the 10 April 2013 has continued to raise awareness of digital radio in the eastern part of Germany with the slogan ‘Digital Radio – the better way’.

In summary Germany is at the point of no return on digital radio rollout because:

For more information about the work of the German Digital Radio Project Office contact Michael.reichert@swr.de

This entry was posted on May 3, 2013 by WorldDAB in Automotive Industry, Benefits of Digital Radio, Content and Services, Digital Radio Rollout, Europe, Marketing, Receivers.