The tick mark offers reassurance to consumers and gives them an indication of products and services which are “future-ready” and compliant with the Minimum Specification. The tick mark can be used on approved DAB digital radio products and installation services at the point of sale, online and on packaging.

From a Government perspective, this mark is required as part of the UK’s plan, working towards a future Digital Radio Switchover. For industry and broadcasters, the criterion for the tick mark directly relates to the UK’s coverage plans, and ensures that DAB coverage can be defined as-predicted by the regulator Ofcom.

The technical Minimum Specification for the tick mark has been drafted and agreed over the last couple of years by a diverse team of industry experts (broadcasters, transmission providers, the regulator, manufacturers, vehicle manufacturers, technology providers and retailers) working with Government. On the product side, the criterion for being granted use of the tick mark includes DAB, DAB+ and FM. There is also a sensitivity requirement for receivers and service following and traffic announcements are required on the in-vehicle side. For installers and dealers, there is a set of professional criteria and a training regime. 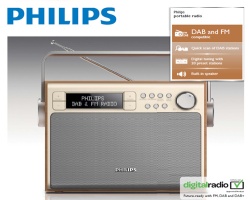 In the UK, a similar mark was used during Digital Television Switchover, which completed in 2012. By using a similar logo as TV (which used a pink coloured tick), consumers have some recognition of the mark already.  In a recent independent study, one third of consumers said they recognised the tick mark – we will continue to track awareness and understanding.

The supply chain has reacted positively to the launch of the tick mark. Successful applicants include some of the biggest radio brands in the world –  including Roberts, Pure, Sony, Philips and Pioneer – and many of these manufacturers are using the tick mark on their packaging already.

Starting in spring 2015, Digital Radio UK will start a tick mark communications campaign, initially focussed on in-vehicle aftermarket products. At this point, our communications will point consumers towards the tick mark.

This entry was posted on December 12, 2014 by WorldDAB in WorldDAB Project Office and tagged Digital Tick Mark, DRUK, United Kingdom.