A test drive of DAB along Norway’s fjords

So, how good is the DAB coverage in Norway, really?  Both Norkring, the company that built the network and National Communication Authority which performs the official coverage measurements agree that coverage reaches 99.5% of the population and that road coverage has increased from 89.3% via FM (for NRKs main radio station P1) to 96.5% via DAB (for all 13 of NRKs radio stations on its multiplex), but those are only numbers.

We decided to test for ourselves, by driving from the capital Oslo to second largest city, Bergen, a journey that inevitably would take us over snowy mountains, through the world’s longest road tunnel and along some of the fjords that has made Norway famous.  Not a bad day “in” the office. 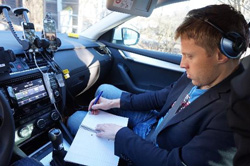 Of course, just to listen to DAB would be a lost opportunity, so we decided to also try out streaming via the telecom network when we were at it.  The car, a Skoda Octavia, was fitted with hands-free equipment for a smartphone and several DAB antennas. The trip also gave us the opportunity to answer questions about antenna options as well.  Michel Gascoin from NRK fitted two glass antennas, and one outside roof antenna. The latter proved, not surprisingly, to give the best signals.

We experienced only one DAB drop-out on the 480 kilometer long journey.  To be noted, we did not include road tunnels over 500 meters in length, as coverage is currently being built in them…  This huge project (almost 50 tunnels have DAB coverage already and over 200 will get it) is due to be finalised by 2017, when FM will be shut off.

Only one DAB drop out on the 480km journey.

The roof top antenna proved to be the most stable with the only one drop out, the two glass antennas struggled somewhat more in certain areas of low signal strength.

And streamed radio? ‘We drove the same route back and experienced on average 42 drop outs. This amounted to 80KM with no coverage.  Very annoying!  One sixth of the 7 hour long journey without radio would not have been a compelling experience. And, we were presumably among very few motorists streaming radio on this route.  What if there had been no broadcasting network and everyone would have to stream? Then imagine the same situation during rush hour.

On top of those streaming music, uploading jaw-dropping photos from the fjords to Instagram, checking their emails, sending their tweets or updating statuses on Facebook. The future includes broadcasting. Combination is king.

For more information on DAB+ developments in Norway, visit the the WorldDMB Country Information section.