This article was originally published on Radio World

Broadcasters and the wider audio industry in Australia aren’t the only ones welcoming the digital revolution with open arms, as the latest figures released by Commercial Radio Australia indicate consumers are embracing radio’s transition to digital.

According to the latest figures on DAB+, more than 930,000 DAB+ receivers were sold in Australia in 2018 alone, while average weekly audiences for digital-only radio stations exceeded 2 million. What’s more, over 4.21 million people (approximately a third of the population aged 10 and over) listened to DAB+ digital radio each week in the five metro capital cities in 2018, compared to 3.62 million in 2017.

Digital radio in Australia has come a long way since the initial DAB+ tests that took place in the cities of Sydney and Melbourne in 1999. Following the launch of the original plan for digital radio in 2005, the first commercial and public broadcasters started airing in DAB+ in five of the major cities and capitals of the country — Sydney, Perth, Melbourne, Brisbane and Adelaide. The circle was later completed with the launch of fulltime DAB+ services in Hobart, Darwin and Canberra in 2018. Now, commercial broadcasters are starting to contemplate launching their services in regional locations.

Addressing the audience at the European Broadcasting Union’s Digital Radio Summit in Geneva in February, Jeremy Millar, senior strategy lead at the Australian Broadcasting Corp., pointed out that the size of Australia has been a challenge in terms of rolling out new transmitters. The distance from Perth, on the west coast of Australia to Sydney on the east coast, is just under 4,000 kilometers (2,500 miles), and in European standards, comparable to the distance from Madrid to Moscow.

Taking into account the size of the country, the reach of the AM band has traditionally suited Australia’s enormous geography, with powerful AM transmitters being able to reach far into the inner parts of the country. However, much like in Europe, AM radio in Australia is experiencing a significant decline due to poor sound quality, an ageing audience (primarily people aged 60 and above) and the failure to attract new listeners, which has paved the way for the rollout of DAB+.

While radio listening via AM/FM radio remains important across major networks, radio listening via DAB+ has significantly increased over the past year — so much so that it is now growing at a faster rate than internet streaming. It is also worth noting that despite the large size of the country, the vast majority (over 85 percent) of Australians live within 50 kilometers of the coast, meaning two thirds of the population is currently located within an area serviced by DAB+.

The automotive industry is also helping to facilitate the transition to DAB+, with 36 percent of all radio listening experiences in Australia taking place in a vehicle. The number of cars sold with DAB+ is steadily rising, with 65 percent of all new vehicles sold in 2018 including a DAB+ radio. There are currently over 45 automotive manufacturers selling vehicles with DAB+ in Australia, and just under 2 million cars equipped with DAB+ on the roads of Australia. 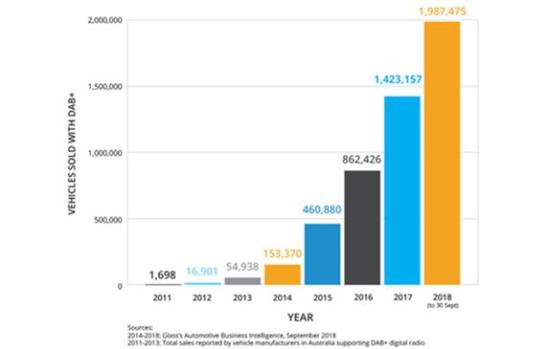 DAB+ has hit the ground running and is quickly turning into Australian’s favorite way of listening to radio. Driven by the automotive industry’s inclination towards DAB+ radio and the inevitable demise of the AM band, annual DAB+ sales are on the verge of reaching one million, and the future of digital radio in Australia is looking bright, much like its sunshine.

More about how Australia has leveraged the power of DAB+ can be heard at the ABU digital Broadcasting Symposium taking place in Kuala Lumpur on March 4–7. The event will comprise a conference, industry exhibition and a number of focused workshops, including one organized by principal sponsor WorldDAB. The half-day workshop titled ‘DAB+ – understanding the business case’ will bring to light some of the latest DAB+ developments from Asia Pacific and Europe, and emphasize what exactly broadcasters need to do to ensure their place in the connected dash.

This article was originally published on Radio World

This entry was posted on February 27, 2019 by WorldDAB in WorldDAB Project Office.